The Global Coalition to Protect Education from Attack just released a  study that identifies 70 countries where attacks occurred between 2009 and 2012, including 30 where there was a pattern of deliberate attacks: 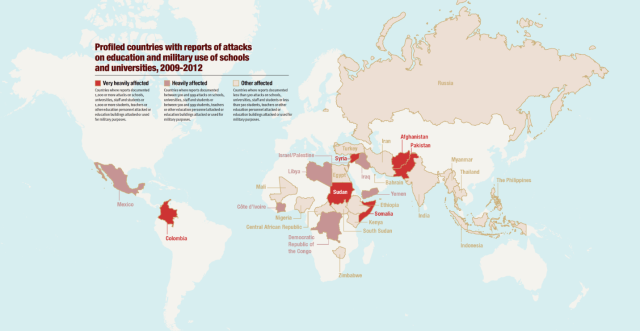 Education Under Attack 2014 is a global study that charts the scale and nature of attacks on education; highlights their impact on education – including on students, teachers and facilities; and documents the ways that governments, local communities, non-governmental organizations (NGOs) and UN agencies try to reduce the impact of such violence and prevent future attacks. In doing so, it provides the most extensive documentation of attacks on education to date.

The study’s four main aims are to:

The Global Coalition to Protect Education from Attack (GCPEA) is a coalition of organizations that include: the Council for Assisting Refugee Academics (CARA), Human Rights Watch, the Institute of International Education/IIE’s Scholar Rescue Fund, Protect Education in Insecurity and Conflict, Save the Children, the Scholars at Risk Network, UNESCO, UNHCR and UNICEF. GCPEA is a project of the Tides Center, a nonprofit 501(c)(3) organization.

The Global Coalition calls for widespread adoption of the “Lucens Guidelines for Protecting Schools and Universities from Military Use during Armed Conflict.” The Guidelines draw on international human rights and humanitarian law as well as good practice to preserve education as a safe zone in armed conflicts.

The main parts of Education under Attack 2014 are: