The Forgotten Education Crisis in the Central African Republic

This post originally appeared on the Education For All blog on October 21, 2013:

World media has captured the Syrian crisis, Egypt’s turmoil and many other disasters around the world.  But who talks about the military conflict in the Central African Republic (CAR), a landlocked country in Africa and amongst the poorest in the world? An estimated 400,000 people have fled their homes since rebels ousted the government in May and are now displaced in their own country. Many of them hiding full of fear in the forests, many of them children. In addition, 65,000 refugees from the CAR fled to neighboring countries. In total, about 10% of the total population has been uprooted by the ongoing fighting.

The UN Security Council is seriously concerned about the security situation in the CAR and approved a new resolution earlier this month focusing on humanitarian assistance, protection of human rights and the security situation. The civilian population has suffered countless acts of violence since May including looting, destruction of homes and rape, reports the United Nations Office for the Coordination of Humanitarian Affairs. As it goes in such conflicts, the poorest are suffering the most, losing the little they have. For many people this means losing their homes and the ability to cover basic needs: no clean water, no health care.  For the children, no education and loss of their one chance in life to attend school. 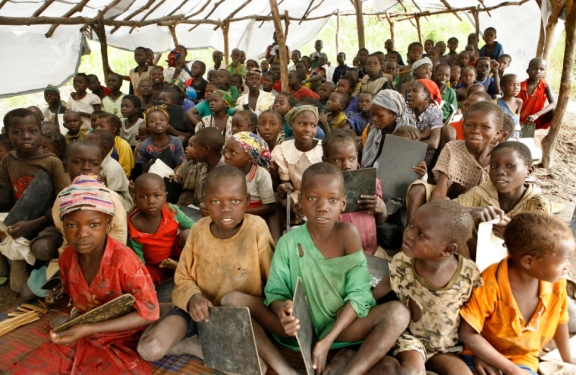 Too little funding for education in humanitarian crisis

Let’s take a closer look at the impact of the crisis on education: Schools have been closed, particularly in Ouham, Ouham-Pende and Ouaka provinces where the fighting is worst. Furniture, equipment and books have been destroyed, teachers have fled. The U.N. Consolidated Appeal has requested $195 million from the international donor community to assist with basic humanitarian aid. Of this amount, only $22.5 million is for education support of which only $7.3 million (32%) has been funded so far. Overall, just 39% of the overall humanitarian funding needs have been covered. This is shocking and another indication of the global education crisis we are facing today.

The Central African Republic is a GPE partner country

But the Central African Republic is one of 59 developing country partners of the Global Partnership for Education. The country joined the partnership in 2008 with a strong education sector plan promoting universal primary education; improving learning and expanding universal literacy and developing higher vocational education.

With GPE’s involvement, a dynamic local education group formed including the government, donor agencies, international development organizations and civil society and actively engaged in improving the education sector. UNICEF is coordinating this group, but many members have left by now due to the security situation. Between 2008 and 2013, a $37.8 million GPE education grant was used to build more than 500 new classrooms and rehabilitate another 400 allowing thousands more children to go to school. To improve the quality of learning, GPE grant funding was used to train and certify 1,500 teachers and distribute more than 1.3 million reading and math textbooks to schools. This reduced the number of students per textbook considerably, from 7 to 1.

As a result, we could see real progress between 2008 and 2011. More children went to primary school, an increase from 74% in 2008 to 87 % in 2011 and more children completed primary school. While much more needed to be done, the progress that has been achieved  is now at risk of being wiped out. A rapid assessment organized in August 2013 by the Education Cluster showed that about 50% of all schools visited were still closed and almost half of the school year had been lost. Even more serious is the low school attendance rate: Out of every 100 students enrolled in school in September 2012, 70 were still not back in schools assessed in August 2013. The fear of violence and the lack of teachers were identified as the main reasons why children did not come back to school. School feeding and the restoration of order and security are key issues to encourage children to return to school and I am glad that our partners from the World Food Program are preparing for emergency school feedings for 100,000 students.

The political and security situation remains fragile and unpredictable, but we cannot forget the children in the Central African Republic who need our help now – not next year or whenever the situation calms down. That’s why we are initiating an emergency program through our new accelerated funding process. UNICEF and the Education Cluster, our GPE partners on the ground, have prepared a proposal for $ 3.7 million.

Since its approval in April 2013, this new operational framework for effective support in conflict-affected and fragile countries (PDF) has already been applied twice – once in the South Central Somalia region providing $1.4 million and once in Yemen providing US$ 10 million for emergency education needs. With 28 out of our 59 developing country partners considered “fragile”, I suspect this won’t be the last time and I am glad to see our increased flexibility put to work.

The emergency program targets the most affected prefectures (as soon as a minimum level of security is guaranteed), in coordination with the Education Cluster’s work. It will help children to go back to school by supporting parents’ associations to rehabilitate classrooms and equip them with furniture and learning materials. The program will also provide temporary financial support to the most vulnerable teachers enabling extra courses for students to make up for missed classes while the schools were closed. The funding will also reduce parents’ contributions to school.

Let’s call on the international community to support education in the Central African Republic so that millions of children can go back to school, learn and develop their full potential for a better and healthier life.