Get ready for the International Day of the Girl: Bring Girl Rising to School

You liked the film Girl Rising. You believe in its potential as a movement. Now, Girl Rising is a curriculum.

Girl Rising is a groundbreaking film that promotes a powerful truth: educating girls in the developing world can transform families, communities, entire countries – and break the cycle of poverty in just one generation.

The Girl Rising curriculum, based around the stories of two of the film’s heroines, teaches students to think critically about issues tied to educating girls, and about their own responsibilities and potential as global citizens.

Girl Rising provides teachers with a unique opportunity to educate students about the issues surrounding, and the impact of, girls’ education in the developing world. To help teachers learn about the movement and the predominant issues, and effectively share the information with their students, the Pearson Foundation has created this standards-aligned curriculum for two chapters in the film: Suma from Nepal, and Senna from Peru. Both chapters featured in the curriculum are available in Arabic, Dutch, English SDH, French, Hebrew, Portuguese, Russian, Simplified Chinese, and Spanish

Bring Girl Rising to your school, with a common core-aligned curriculum for upper elementary through high school students. The curriculum is free and available here:

Additionally, The International Day of the Girl Curriculum includes units for elementary, middle and high school and is not explicitly tied to the film, Girl Rising.

One Simple Way to Make the World Better: Educate Our Daughters 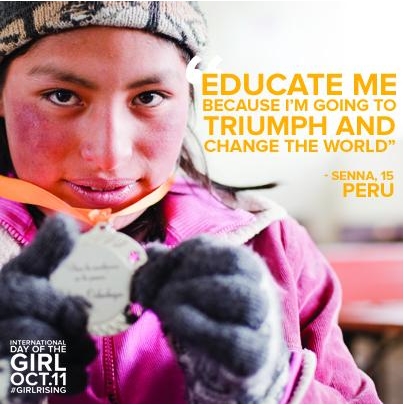 This post originally appeared on Teach For America‘s Pass the Chalk blog.

“Education is not the filling of a pail, but the lighting of a fire.”

William Butler Yeats wrote that, and I believe it. As a journalist, I’ve seen it in schoolchildren around the world — on a dirt road in Zambia, where boys and girls emerged from the dust with inexplicably crisp uniforms and wide smiles; on a remote Indonesian island, where girls hugged their tattered notebooks to their chests as if they were made of gold; and in the most challenged school districts in our own country, where I’ve witnessed that moment when a spark lights and the future changes.

Teachers see this every day in the faces of their students, the hopes and dreams that an excellent education can bring. I suspect that’s why they do what they do. That’s definitely why my colleagues and I created Girl Rising, a film and global campaign for girls’ education. And it’s why people everywhere are responding. Take a look at this map: Girl Rising called for celebrations across the globe to mark the International Day of the Girl on October 11 — and in just a few weeks almost a thousand community groups, individuals, corporations and schools have signed on.

Think about this: There are 66 million girls in this world who aren’t in school — and educating them is the simplest way to make the world a better place. The second part of that sentence is exhilarating.

The barriers to girls’ education in the developing world are complicated, no question — early and forced marriage, sexual violence, poverty, AIDS, tradition — but we know that if you educate girls, great things happen. Educated girls become women who marry later and have fewer and healthier children. They educate their own children, boys and girls. They stand up for their rights. Families and communities prosper, and economies grow.

That’s what Girl Rising is all about: spreading that message by telling stories. And it’s inspiring to see how the stories of the nine girls in the Girl Rising film have captured the imagination of audiences everywhere and, most especially, of young people. I’m struck — and amazed — each time I go to a screening by how the kids in the theater connect with the kids on screen, even though they are continents and cultures apart. That’s what convinced us, in collaboration with the Pearson Foundation, to create a Girl Rising curriculum for schools. That’s why our friends at Teach for America, and other educators in our community, believe in it.

Let me tell you about just one girl from the film. Senna — a warrior, her father called her — is a 14-year-old who lives in the squalor of a mining town high in the Andes, where it snows year-round, where there are no sewers or paved roads, where almost everyone dies young and where there are likely fewer girls in high school than in brothels. “There is no hope for me,” Senna’s dying father told her, “but there is for you. Study.” And study Senna did, discovering poetry amid the bleakness and finding the fighter buried deep within her soul.

Senna and the other girls of Girl Rising represent millions of girls who also just want a chance to go to school and to thrive, who dream not of diamonds but of classrooms. They are girls who, if educated, will change the world.

That’s why I hope you will join me and the Girl Rising community to celebrate International Day of the Girl by standing up for girls’ education. Host an event, screen the film, or raise funds for programs that support girls. If you’re a teacher or school leader, bring the Girl Rising curriculum to your students; introduce them to the thrill of being global citizens. Be part of something big.

“I feel as though I have power,” says Suma, another unforgettable girl in the film. “I can do anything. And I have important things to do.”