The Office has secured political and diplomatic engagement of Member States on the protection of conflict-affected children through the submission of reports to the General Assembly and the Human Rights Council and by assisting in the preparation of the Secretary-General’s annual and country-specific reports on children and armed conflict to keep the Security Council appraised of developments on the ground.

The 2012 annual report on Children and Armed Conflict presents information about grave violations committed against children in 22 country situations, it notably:

The report also includes what is known as the “List of shame”: this is the list of armed groups and armed forces who recruit and use children, kill and maim, commit sexual violence or attacks on schools and hospitals in conflict zones.

The full report in English can be downloaded here: 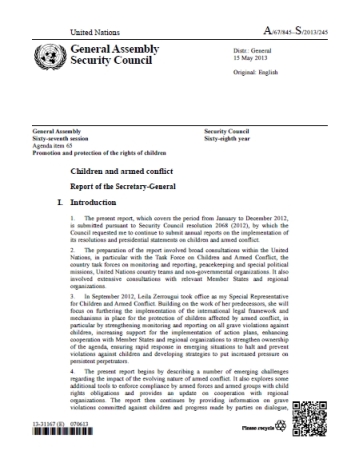 It is also available in other languages on this page.

For more information about the Office of the Special Representative of the Secretary-General for Children and Armed Conflict, please visit this link