From Ignorance To Inclusion: Gender-Responsive Climate Adaptation in the Middle East And North Africa Region

Despite this, the report finds that multilateral development investments have not prioritized gender-sensitivity in adaptation projects.

Based on in-depth gender analysis of all of the active multilateral climate change adaptation-related projects in the MENA region, the report finds that too often these investments view women as passive victims of climate change, ignoring their extensive expertise and agency in adaptation activities. This both compromises women’s human rights and undermines the effectiveness of climate smart projects. The report recommends that multilateral investments integrate gender dimensions and promote women’s involvement as leaders in climate change adaptation and environmental management. “From Ignorance to Inclusion” reinforces Gender Action and the Heinrich Böll Foundation’s efforts to promote women’s full, consistent and meaningful participation in climate change investments. 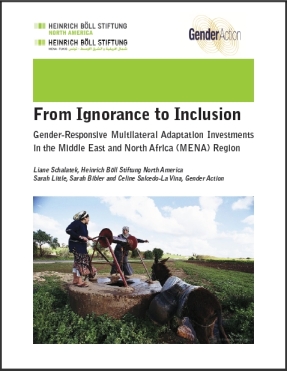 Sustainable use of its environmental resources is by many considered to be probably the most severe long-term development challenge for the Middle East and North Africa (MENA) region, which is also one of the regions of the world to be most severely affected by climate change. Yet despite a strong nexus between poverty as well social, political and economic exclusion and poor management of natural resources, governments in the region have not prioritized investments in the sustainable management of water resources and improvements in agricultural practices and productivity as the key to sustainable development. Nor has the region’s considerable oil wealth been used to build the governance and production structures needed for social and political equity and justice.

Women in the region, despite vast differences in their economic status, in particular have remained the societal group suffering from the most severe social and political exclusion despite important advances in improving their educational and health status. With climate change impacts expected to exacerbate existing inequalities and vulnerabilities, women in MENA countries due to the prevailing social and cultural norms in the region that deny them political, social and legal equality with men, are thus facing climate change impacts differently than men, with coping abilities and strategies that are local context-specific as well as gender-specific. Both local context and gender specificity need to be taken into account in projects and programs that deal with climate change impacts in the region and focus on reducing the vulnerability of nature and human systems to these impacts. This is important for domestic investment efforts – and there is no denying that governments in the region need to spend more on adaptation measures themselves –, but particularly also for bilateral and multilateral financing support by developed countries for the MENA region.

This in-depth gender analysis reveals broad patterns related to gender sensitivity within adaptation projects in the MENA region. For example, regionwide projects tend to be more gender insensitive, while country-specific projects tend to exhibit greater gender sensitivity. Also, projects that conduct and incorporate a thorough gender analysis as an essential step in project design are more likely to achieve gender sensitivity throughout project implementation. Overall, climate investments view women as passive victims of climate change, ignoring their extensive expertise in adaptation and undermining the effectiveess of adaptation projects. Of the 32 reviewed projects, the analysis found that 53 percent were gender insensitive, 19 percent moderately gender sensitive, and only 28 percent gender sensitive. Eight examples of “best and worst practices” are provided to illustrate these broad findings. Given women’s and men’s distinct climate change adaptation roles, investments must proactively respond to differential gender needs. While projects should be designed to address specific gender dimensions of targeted populations in local contexts, and thus no two adaptation projects should be identical, some guiding principles that support gender rights and women’s empowerment within a wider human development context are particularly relevant to adaptation investments. To ensure that all climate change adaptation projects help and do not harm women, the authors recommend that these investments: